RAYAVARAM, India — Palaniappa Chettiar has always been goal oriented, and when he turned 97 three years ago, he set himself a new one.

No one within memory in his family, extended clan or village had reached 100. Determined to get there himself, he cut down on the yolks in the raw eggs he swallows daily for breakfast, took extra care on his daily four-mile walk to the local Hindu temple and started planning for a party the likes of which few here (or anywhere, for that matter) have ever seen.

Early in January, Mr. Chettiar celebrated his century, and threw open the doors to his pillared ancestral home in this remote village in the South Indian state of Tamil Nadu, to what appeared to be every person he had ever met — about 7,500 of them.

Summoning a local cook his family has turned to over the decades, he and one of his numerous grandsons chose a menu and settled on a rough guest list that included immediate family; members of both his extended clan and the larger community of prosperous traders known as Chettiars; friends from neighboring cities like Chennai, Madurai and Tiruchirapalli, and people from the numerous small villages surrounding his own. 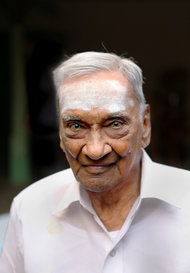 “He’d issued so many verbal invitations, actually, we had no way of knowing how many would turn up,” Mr. Chettiar’s grandson Arunachalam Kasi said recently as a steady stream of guests arrived at the Chettiar house seeking blessings from the old man.

When the first estimate of 1,500 became 3,000 and then ballooned to 5,000, the organizers stopped counting. By the time the big day rolled around on Jan. 2, they had already quadrupled their order of the banana leaves they use as plates. “We were prepared for anything,” Mr. Kasi said.

Six months earlier, Mr. Kasi and his wife had begun planning in earnest, organizing a vegetarian feast served in shifts at tables set inside the Chettiar house and in a striped tent over an adjacent courtyard. The menu aimed to showcase a richly aromatic and highly spiced cuisine that has inspired an adage in India: You are lucky to eat like a Chettiar.

There would be three kinds of rice: white, savory and sweet; North Indian-style biryani, and dollops of dal. There would be sambar and a selection of five different curries, at least one a hearty dish made with eggplant, or brinjal. There would be individual bowls of fresh curd, or yogurt, and crisp papadums on the side. There would be, of course, the various pickle relishes without which no Indian meal is complete.

Supersize parties are unexceptional in a country where “go big or go home” may as well be an immutable verity, a place where religious pilgrimages, like last year’s Kumbh Mela in Allahabad, Uttar Pradesh, routinely draw scores of millions. What set Mr. Chettiar’s wingding apart were the crowds it drew to a dusty village two hours by road from a major city.

Among the Chettiar merchants and traders, celebrations with 1,000 or more guests may be considered intimate. “For my daughter’s wedding, 8,000 ate breakfast,” said Alagu Muthu, a former president of the National Association for the Blind, and a Chettiar. “We had 5,000 for lunch.”

Last year, when her 28-year-old nephew, Karthik Meyyappan, a descendant of the rajah of Chettinad, married Parvathi Saravanan, a 21-year-old from Bangalore, the two families descended on their ancestral homes like an occupying force.

The secret weapon in that case was Mr. Meyyappan’s grandmother Meenakshi Meyyappan, a redoubtable septuagenarian who runs the Bangala, an internationally known 25-room hostelry in the clamorous town of Karaikudi.

After decades of organizing weddings, reunions and Shashti Poorthi (as the highly significant 60th birthday celebrations for male Chettiars are known), Mrs. Meyyappan has large-scale feeds down to a system. “First you book the cook,” she said. “There is always a fight for the cook,” a fact that owes to the brevity of the local wedding season here and a general clamor for astrologically auspicious days on which celebrations can be held. A contract is drawn up over a bowl of nuts and betel leaves, Mrs. Meyyappan added, and “then you create a menu and get to work.”

For the last half-century, Mrs. Meyyappan has called on a cook contractor called Natesan, a sturdily built man of 87 whose cool confidence in the face of daunting numbers comes of cooking for more than 65 years. The team of choppers and cooks led by Natesan and his son N. Murugesan typically numbers over 100.

For Mr. Chettiar’s birthday, there were 220 people in the kitchen under the supervision of another head cook. “Seven thousand is nothing much,” Natesan said through an interpreter. “We did a wedding once for the daughter of a politician, and so it was expected that all the people from the local villages would come.” For that party, Natesan and team cooked 35,000 meals.

As at Mr. Chettiar’s feast, they were proper meals, not soup-kitchen-style buffets. Seated in shifts, diners were served by waiters wearing starched white shirts and traditional male garments called dhotis who, in unison, spooned out delicacies from pots of clay or stainless steel.

The list of ingredients was truly eye-popping. Among the 85 itemized components were 200 lemons; 400 snake gourds; 77 pounds of green chiles; 200 bags of tomatoes; 75 pounds each of chile and coriander powder; 375 pounds of potatoes; 640 pounds of red, white or raw rice flour; 7,500 banana leaves, and 500 coconuts.

“People love my grandfather, and so the cooks provided the tables and chairs for free,” Mr. Kasi said. “They only charged for the labor and ingredients,” he added, noting that there was no need for utensils because in much of South India, people eat with their right hand.

For his part, Mr. Chettiar distributed 500 saris and an equal number of dhotis, and funded a new wing for the local school. The feast cost $100,000, or roughly $14 a head, a sum that barely fazed the centenarian, who spends mornings trading on the Indian stock market and evenings glued to cricket matches on television.

“Of course, it was worth it,” Mr. Chettiar said of his big day, pronouncing himself well contented with the way it all turned out. “Full satisfaction!” he said.

This entry was posted in Press. Bookmark the permalink.